Tickle Your Taste Buds And Know What Does Lobster Taste Like

Known as the king of seafood, lobsters are considered as expensive crustaceans. Whether in restaurants or supermarkets, their expensive price makes people hesitant. With this, if you have not yet had a bite of its delicious flesh, don’t worry. Many others cannot afford to eat it!

If you are wondering what does lobster taste like, keep on reading the rest of this post. I will share with you more about its flavor, as well as other important things you have to know. Once you are done reading, for sure, you will realize that buying lobster will be worth it!​

Quick Navigation
What Is Lobster?
What Does Lobster Taste Like?​
What Are The Best Ways To Cook Lobster?​
Conclusion

Lobster refers to a 10-legged crustacean. It is from the family of large sea shrimps. It has an elongated body and muscular tail. They are known for their powerful claws and large size. On average, they weigh 20 pounds.

There are generally two types of lobster. The first one is a hard-shell lobster and the other is a soft-shell lobster. Choosing which one is better will be a matter of personal preference. Regardless of which one you eat, there is one thing that is for sure – it will be flavorful.

Also, aside from the shell, lobsters can also be different in terms of their claws. There are some with claws while others are clawless. They may have different looks and the flavor can also vary from one species to another.

If there is one thing that most of us know about lobsters, it would be the fact that they are expensive. Limited supply is one of the reasons for this. If you live near fishing villages and coastal towns, on the other hand, consider yourself lucky since lobster will definitely be cheap in your area.

As the king of seafood, you must already have an idea that it has a delicious meat that is sure to make you drool. Its taste is close to crab, but they are nowhere exactly the same. Lobster meat tends to exhibit a sweeter flavor while also being lighter. It is not fishy.

More than the taste, lobster’s texture is another reason why it is a favorite for many picky eaters. It is not as flaky as crab and not as chewy as ﻿﻿shrimp. For some people, although it can depend on the way lobster is cooked, they say that it melts in your mouth.

However, you should also know that the sweetness and light flavor of lobster will actually depend on where it is from. To enjoy its optimal flavor, regardless of the specific type and the way it is cooked, make sure to choose one that is fresh.

What Are The Best Ways To Cook Lobster?​ 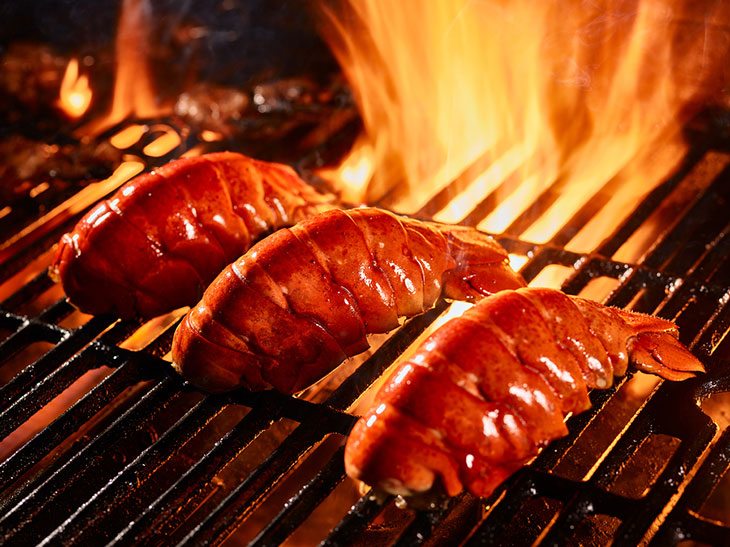 Of course, it should also be pointed out that the specific flavor of lobster will depend on the way it is cooked. If you plan to cook it on your own, it is important to handle it properly, especially because it is an expensive seafood. Choose a method of cooking that will be suitable for the flavor that tickles your taste buds.

Grilling is one of the most popular ways to cook lobster. To make it more flavorful, you might want to consider adding lemongrass, garlic, and butter. This method of cooking will take out the juice from the meat and will make it end up dry. Nonetheless, it is flavorful and aromatic, even with the minimal use of herbs and spices.

Steaming is also a good way to cook lobster. This is a gentle method and will make the meat juicy. The meat will be tender as against grilling. This will result in a sweet flavor, which is not altered by artificial flavorings. It will also be juicy and soft.

There are also many ways by which you can eat steamed lobster. You can dip it in mayonnaise, sprinkle it with pepper, or spritz it with lemon juice. Choose one that will be perfect for the taste that you want to experience.

The good thing about steamed lobster is that once it is cooked, you can take out the meat from the shell and incorporate it in different recipes. The sky is the limit when it comes to the possibilities. You can make it an ingredient for a well-loved pasta dish, hot soup, or fried rice, among others.

There are literally endless ways to cook and use lobster in your recipe. You can make lobster rolls or even a lobster pizza. It can be used in ravioli and bisques. To fully maximize its flavor, you should also choose wisely what can be eaten with it. Some of the most popular include pasta, rice, and corn.

Here is a short video that will show you a guide to the preparation and cooking of live lobster:​

So, what does lobster taste like? How can it be a tasty treat? Here is a summary of the things that I have earlier discussed.

Have you tried eating lobster before? How was its taste? Do not hesitate to leave a comment below.

How Long Is Sour Cream Good After Sell By Date?

How to Marinate Ham? Step-by-Step Instructions You Need to Know

How Much Does A Cup Of Cheese Weigh?

What Can I Use Instead Of Beef Broth? What Are the Best Alternatives?

How Long Do Peppercorns Last - What Is the Shelf Life of Every Type?
How Long Is Sour Cream Good After Sell By Date?
What Are Gold Flakes - The Complete Information You Need to Know
How to Marinate Ham? Step-by-Step Instructions You Need to Know
What Is A Press Drink and How to Make It?
What Is A Slippery Nipple and How to Make It Quickly?
How Much Does A Cup Of Cheese Weigh?
How Many Shots In A 375ML Bottle of Liquor?
What Can I Use Instead Of Beef Broth? What Are the Best Alternatives?
What To Do With Bolillo Rolls and How to Make Them?